The other night I went to an open mic night at a local coffee shop. Beth and I learned about the event a week or so ago when we visited the coffee shop. In fact, it was only the second time we’d been to this particular coffee shop. The first time was the day we first considered moving to Santa Cruz.

So, when I noticed the open mic night, I figured I’d give it a shot. At the time, I had no idea what to share from the stage. I have plenty of material I could read as well as several stories I could tell, while at the same time I know I can’t sing, so that was out.

Beth thought about going with me but backed out at the last minute. We had already had a full day, and frankly, I was tired too, but I decided to go anyway.

I showed up a few minutes before the scheduled 7:00 start time and found only two slots available to sign up.

I learned about how open mic nights work by watching “The Marvelous Miss Maisel” on Amazon Prime Video. In this wonderfully entertaining series, the title character becomes a successful stand-up comedian. The interaction with her manager, her family, and players in the entertainment industry are to die for. At the beginning of her adventure, she gets her start by performing at open mic shows. No one knows her, but she is putting it out there and makes it all work.

As I looked at the two slots – one at 8:20 and the other at 8:30 – I hesitated. I thought, maybe I’ll just sit and watch to see how it works and sign up next time. I’m not even sure what I will say if I get up there. I started to back away when I stopped myself.

I ordered an iced coffee (decaf) and found a place to sit and watch the performances. I happened to sit next to Israel Sanchez. A professional performer who came in from San Jose to sing a few songs.

As I waited for my turn at the mic, I picked out a couple of poems to read.

Some of the performers were pretty good, including my new friend Israel. Most of them were singers. They stepped up on stage with their guitars and stood or sat while they played their two-song limit. Most of their music was original. It was fun to watch them share their gifts with the audience.

Suddenly, the MC said, “Next up is Josh, and on deck is Peter B. Is Peter B. still here?”

Josh shared a poem as well. His was a missive about a girlfriend he left behind in Massachusetts before he rode his bicycle out to Santa Cruz. It turns out she dumped him as soon as he walked out the door (or maybe that’s why he left?). Anyway, just like with all the other performers, the audience politely applauded as he concluded and walked back to his chair. 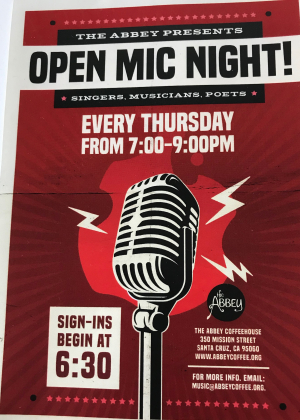 I made it up to the stage and read my two poems. I felt comfortable up on stage and felt good when I finished to polite applause.

When I returned to my seat, I had an interesting and compelling feeling: ‘How did I do?’

Someone asked me the other day if I was an introvert or an extrovert. I paused for a second and responded, introvert. Why, then, was I standing in front of a room of strangers reading my poems?

It wasn’t to get their approval. It was for the practice and experience of standing in front of a group of strangers. I still want people to like me and give me their approval, but it wasn’t the driver for me.

For me, it’s fun to pay attention to what is going on with my feelings and thoughts after I do something new. I am learning an awful lot about what’s important to me when I do things like the open mic night that put me outside my comfort zone.

It’s when I’m outside my comfort zone that I begin to notice feelings and find interesting thoughts that bubble up, and they are helping me to start to understand something new about myself.

I wouldn’t have chosen to do things outside my comfort zone in the past, but now I am willingly going out and doing new things, just to learn more about me. I’m finding I’m pretty interesting and amazing – who knew?

← Allowing and Accepting What Is Living in the Moment →

Signup for our latest insights and observations